Holistic Health Blog
You are here: Home1 / Remedial massage, Shiatsu and Chinese massage (Tui Na)2 / Massage to the rescue when shoulder pain gets in the way 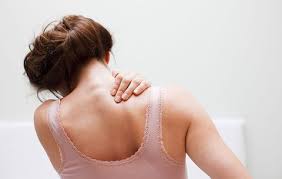 Men, women, and teens can experience restricted movement due to shoulder pain

Shoulder pain can impact on your day. It can disrupt your sleep and make the simplest actions like brushing your hair or reaching for items on the top shelf of the pantry unbearable.

What can be done to break the cycle of shoulder pain?

Jane* was seeking help for her persistent right shoulder pain that was aggravated when she raised her arm above her shoulder. This pain had been ongoing for three months and had been limiting her ability to exercise and move freely. Remedial massage had been recommended to improve movement and reduce pain.

I approached the consultation as I always do with a thorough history and background of Jane’s condition. I conducted a thorough assessment of both shoulders, comparing movement, symmetry and strength in each arm and closely observing posture that can affect how the shoulders are positioned.

What I noticed first was that the affected shoulder was brought forward and held higher compared to the unaffected shoulder indicating that those muscle groups of the chest and top of the shoulder were creating the problem by raising the shoulder and scapula up and forward and limiting movement of the right shoulder. This was confirmed with palpation of the muscle groups to the chest, upper shoulders and those muscles surrounding the scapula.

Jane returned for a further three weekly massage treatments and her pain had resolved after the fourth treatment. Jane was able to return to regular exercising and was even able to help her sister move house at our last consultation.

When your baby is breech in the final weeks of pregnancy …. Acupuncture, TCM...
Scroll to top