Holistic Health Blog
You are here: Home1 / Counselling/Psychotherapy2 / Men and depression – the courage it takes to fight this silent epidemi... 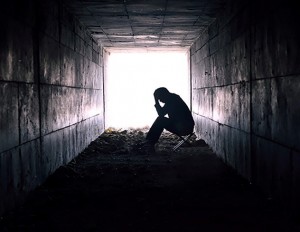 Depression in men – it takes courage to seek help

Picture the worst person you can imagine whispering the cruelest things in your ear. Now picture yourself believing every single word. To try and get away from that person, you start isolating yourself from everyone. But that person is actually thoughts inside your head and they follow you around and the pressure cooker of feelings continues to build and build.

You feel like you’ve got no way out and that it would be embarrassing to tell anyone.

It robs them of joy, of connection with loved ones, of their own self-worth and physical strength. Worst of all, some men don’t even know this is called depression.

Why don’t men talk about depression?

Sadness, loneliness, despair and helplessness are likely to be taboo words for most men. That’s because when men have any vulnerable feelings they are often hit with a huge tsunami of shame that follows closely behind. Shame is created by the messages men get directly or indirectly about which emotions are acceptable and not acceptable. These beliefs are borne within a family, relationship, community, religion, culture and society in general.

How do men discriminate against themselves?

Men’s stories about their negative feelings sound something like this:

“I am strong when I’m tough, independent and unemotional.”

“If I can’t tough it out alone, there is something wrong with me.”

These views form a centrepiece of self-stigma. It is how men add shame, embarrassment and humiliation to their emotional experiences. It acts as handcuffs for men, preventing them from reaching out for help and contributes to men not seeking support until their depression is very severe, if at all. It’s no wonder then that the biggest killer of men under 45 is suicide, that 1 in 4 men have thoughts about taking their own lives and that more than 40% suffer in silence, never telling anyone how they are thinking or feeling.

Joel* was a 35 year old outwardly successful engineer who came to see me for help with his gambling and his daily marijuana use. His partner of 10 years had recently discovered his gambling and the loss of a sizeable amount of money. His relationship was now in crisis and they were considering separation. Joel was unable to open up and explain to his partner what was going on inside of him. Every time he went to look inwards he felt like a ‘cloud’ would come over him that left him confused, ashamed and at a loss for words.

Marijuana helped him relax in the evenings and gave him some relief from the negative self-talk that he was failure and that there was something deeply wrong with him for not being able to snap out of it. The more he hid and kept secrets, the more ashamed he grew of his behaviour as he knew he loved his partner and could see the impact of his actions but nevertheless, felt compelled towards these behaviours.

At the same time Joel was becoming increasingly withdrawn around his friends and partner, he also noticed he was getting more irritable over small things. When a stranger would brush past him on a crowded street, he became convinced that they were showing him disrespect deliberately and would become engulfed with anger and fantasise about ‘smashing them’. Joel began to feel that the world was acting against him.

So by the time Joel came to see me, the cracks in his mask were getting bigger and he was desperate to make a shift. This was Joel’s first ever attempt at talking about what was happening behind his mask with ANYONE – he had not spoken to any of his friends or even his partner about what was truly happening inside of him.

Depression looks different in men and women. In fact, in men who are deemed clinically depressed, some don’t even know they are depressed. All they know is that they have a stomach ache or headache that just won’t go away. They know that they hate their job and they have lost their mojo in the bedroom. Or they know that everyone keeps doing these little things to deliberately irritate them. Or they may know they have become obsessed with work or are turning to alcohol, drugs, gambling or sex to get some relief. Women at this point are more likely to say “I think I may be depressed”. Men, on the other hand are inclined to say “I am not depressed. I don’t want to talk about it. I’m just fine”.

What are the hidden symptoms of depression in men?

Angry and irritable – snapping at your kids, fighting with your partner, having road rage.

Work performance suffers – depression affects your ability to concentrate and your motivation.

Stress-related medical problems – headaches, back pain, irritable bowel syndrome, heartburn, recurrent viral infections, tired all the time, waking up in the early hours of the morning for no good reason, difficulty getting or maintaining an erection.

People feedback – people asking if you are all right, that they can sense something is wrong and that they are worried. Or they are telling you they can’t stand your snappiness.

Numb and shut down – you can’t feel your emotions, even when you want to feel. You don’t feel anything except maybe being annoyed all the time. Feeling empty and very disconnected from other people. For example, not being able to feel the joy celebrating big moments in your life, or not being able to snuggle up and feel close to loved ones.

Deep cover depression – these are the guys that look great on the outside – cheerful, got it together, successful, everybody likes them. But the outside doesn’t match the inside – you may feel miserable, broken or like a fraud.

Addictions/reckless behaviour – relying on alcohol, drugs, gambling, work or sex to take the edge off.

It takes courage to ask for help. You are not a hero if you suffer in silence.

Using a mindfulness exploration technique, Joel and I explored these feelings of shame, disgrace, humiliation; specifically how it felt in the body, what thoughts and beliefs were attached to them. Joel learnt to make room for these unfamiliar yet normal feelings and to give less oxygen to his shame by having them. He learnt to feel his feelings without reacting against them, and to give himself permission to express and communicate his emotions. He found that over time, his shame disappeared. He developed more tolerance, less judgment and more acceptance of himself. He began to see vulnerability as a great strength as it required him to have courage to face risk, uncertainty and emotional exposure. He found it took a lot more guts to be vulnerable than it was to stay hidden and embraced a new definition of what it meant to be “strong”.

Once enough shame had subsided, Joel was then able to learn how to stay and work with increasing amounts of discomfort rather than covering over, pushing away or distracting himself from it. By feeling his feelings in a mindful way, he discovered they were not so bad after all and he could manage them directly by attending to them kindly.

He was able to identify and examine unhelpful templates that he had downloaded from his own childhood and how they played out now in his adult life. From this mindful observer state, he became less reactive, less automatic with his reactions to the world and for the first time ever, he felt he had the choice to shape his reactions to life in the way he wanted them to be. In this way, Joel could re-write his own story.

After cultivating this self-compassion and way of seeing, Joel was able to see the underlying forces that drove him to marijuana and gambling and was able to deal with these feelings at the root source. His discovery of a new way of being in the world had a positive flow-on impact on his relationship with his partner as he now had the language and skills to describe his inner emotional landscape. He noticed he was able to self-regulate when he came across intensity or discomfort and could provide a much more positive presence for his partner that had never ever been there before. And as he liked himself more and more, other people also found it pleasant to be around him again.

*Name has been changed

By Dr Marie Paek, a medical GP and somatic psychotherapist at the Wholistic Medical Centre.

Dr Paek has formal training in a mindfulness-based, body-oriented psychotherapy.

Are you debilitated by chronic persistent pain? Turn the volume down with o...